At first, pedigree charts may appear both challenging and time-consuming to decipher. However, knowing a few simple rules about them makes interpreting them much easier!

Pedigrees are records of mating over generations. They are often used to help identify the chances that a couple will pass a condition on to their children. They can also be used to identify whether the gene for a given disorder is x-linked (located on X chromosomes) or autosomal (located on non-sex chromosomes), and whether the allele for the disorder is dominant (affected individuals need only one allele to express the disorder) or recessive (affected individuals need both alleles to express the disorder).

For each pedigree chart, determine whether the disease is autosomal or sex-linked, and dominant or recessive. 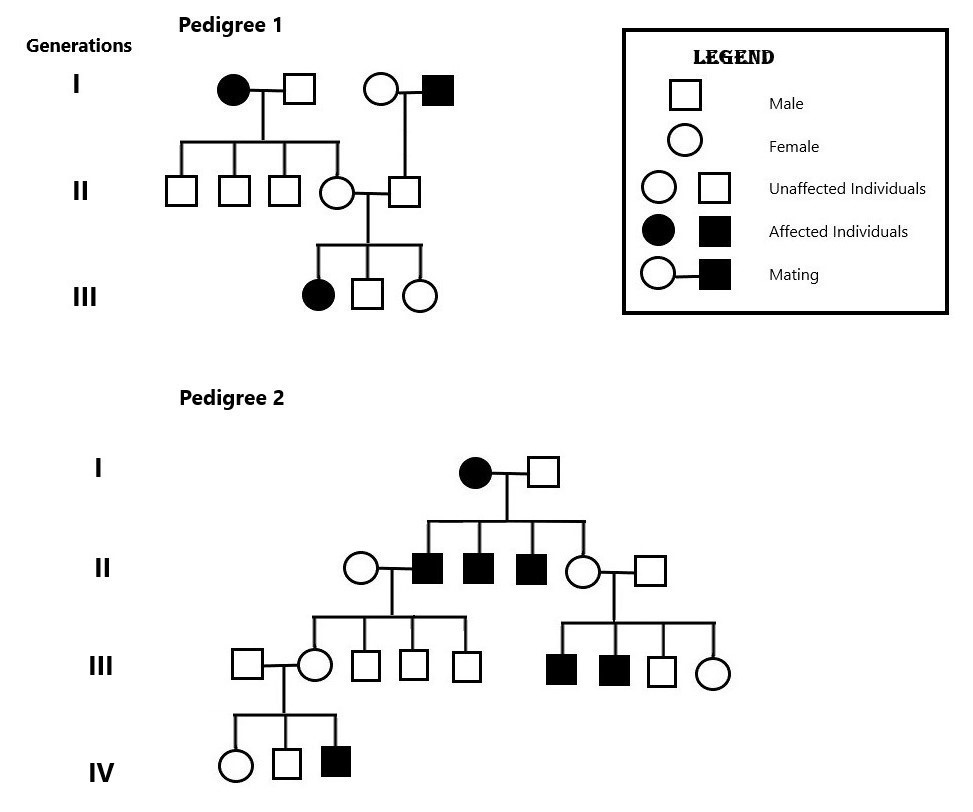 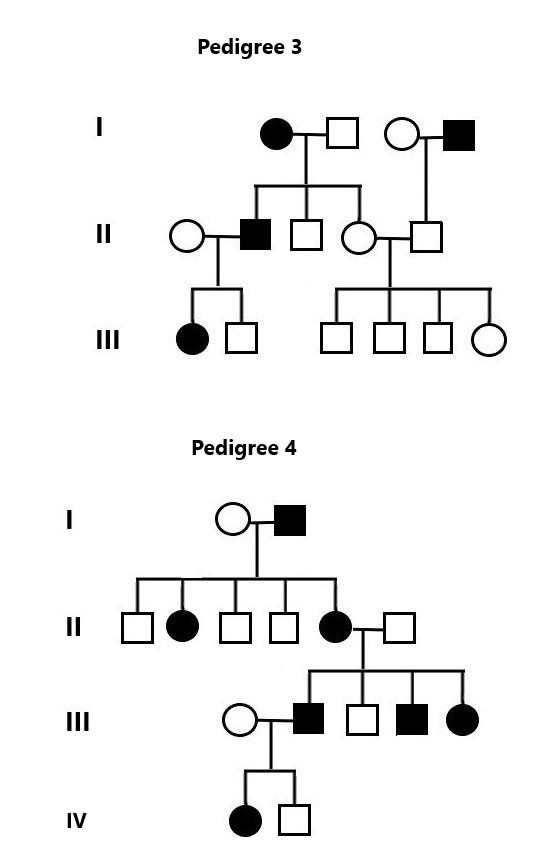 Tip: Before looking at the solutions, try to label the individuals with alleles that you are certain they must have!

1. In the first pedigree, two unaffected individuals are shown to have an affected child. The allele causing the disorder must be recessive for this to be possible, otherwise at least one of the parents would be affected. Also, men and women appear equally affected. Thus, the disorder allele is autosomal recessive.

2. In the second pedigree, an unaffected female (II, 5) has affected children with a male assumed to carry only the normal alleles (II, 6). This indicates a recessive allele. Additionally, the affected male (II, 2) produces no affected progeny, but his daughter (III, 2) must have been a carrier to produce an affected son (IV, 3). This is only possible if the allele is x-linked, since it has been established that the allele is recessive. Furthermore, males are significantly more affected than females. Altogether, this indicates an x-linked recessive allele. 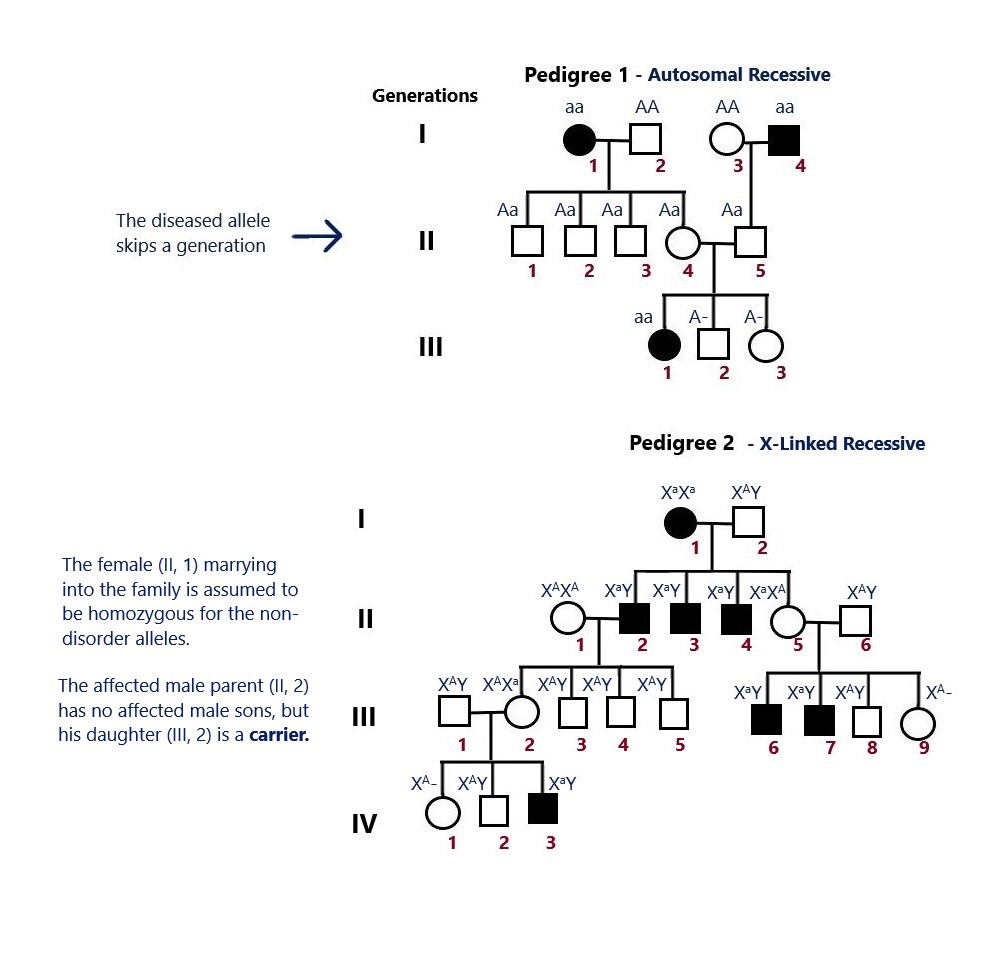 3. In the third pedigree, the mother (I, 1) is affected while the father (I, 2) is not. This father is assumed to be homozygous for the normal allele. If the allele were recessive, no progeny of generation II would be affected because they would be heterozygous for the allele if they carried it at all. Thus, the disorder allele must be dominant, because it appears in each generation. Furthermore, the disorder affects both men and women equally, indicating it is autosomal dominant. 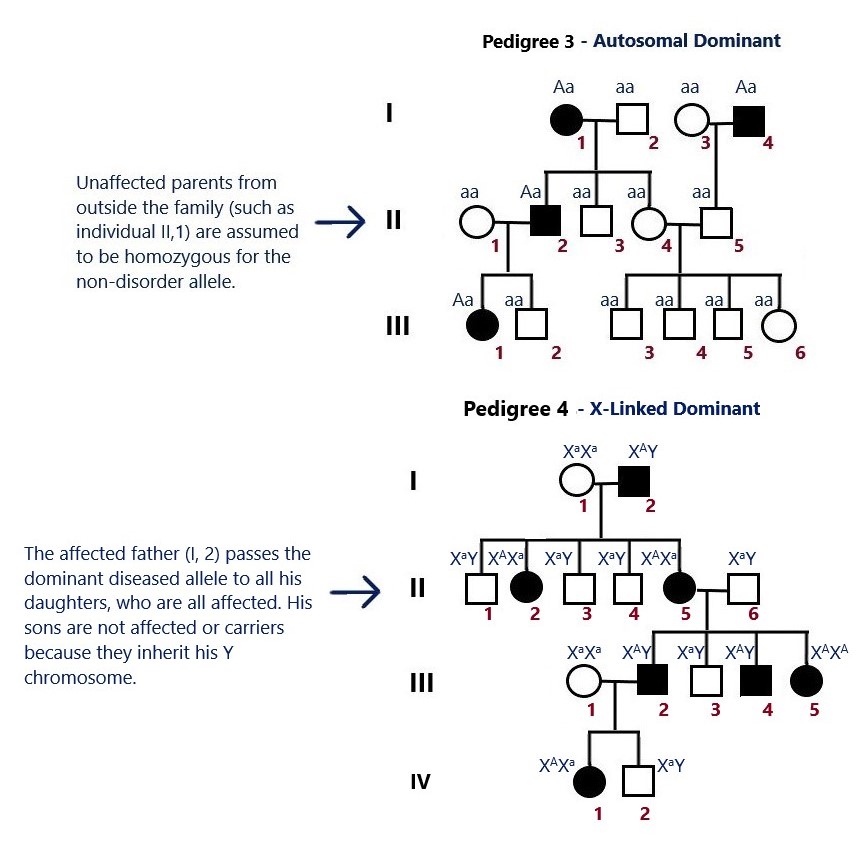 Here is a summary for interpreting the four basic types of inheritances in pedigrees:
Autosomal Recessive Inheritance:
• The disorder can appear in progeny of unaffected parents (which can thus be assumed to be heterozygous for the disorder allele). That is, the disorder can skip a generation.
• Both males and females are affected about equally.

Autosomal Dominant Inheritance:
• The disorder is typically found in each generation, with no skipping.
• Both males and females are affected about equally.

X-Linked Dominant Inheritance:
• Affected males pass the allele disorder to all daughters. Sons cannot inherit the allele from their father because they only inherit the Y chromosome from their father.
• Affected heterozygous females that mate with unaffected males pass the disorder on to both sons and daughters.
• Many more females than males show the disorder.

Additionally, you are always to assume that any unaffected individuals marrying into the family are homozygous for the normal allele.

I hope this sample problem cleared up some confusion about pedigrees. Please contact me if you have any questions! I’m always happy to discuss anything regarding biology! 🙂