What is Really Going on in Mitosis and Meiosis?

Knowledge Roundtable > Tutorials > What is Really Goin…
Get Tutoring Info

What is Really Going on in Mitosis and Meiosis?

Mitosis and meiosis are processes repeatedly visited in biology, and both are important for understanding Mendelian inheritance patterns. These two processes are made up of four basic stages – prophase, metaphase, anaphase, and telophase. It may be simple enough to memorize these names, but what really matters is understanding what happens to the chromosomes in each phase!

Prior to both prophase of mitosis and prophase I of meiosis, semiconservative replication occurs during the S (synthesis) phase of interphase. During replication, the two strands of DNA for each chromosome are unwound, and each strand is used as a template to form two new DNA strands through complimentary base pairing. The amount of chromatids doubles, but the total number of chromosomes stays the same. For this reason, we conventionally denote the ploidy number for Prophase and Prophase I as 2n, not 4n! 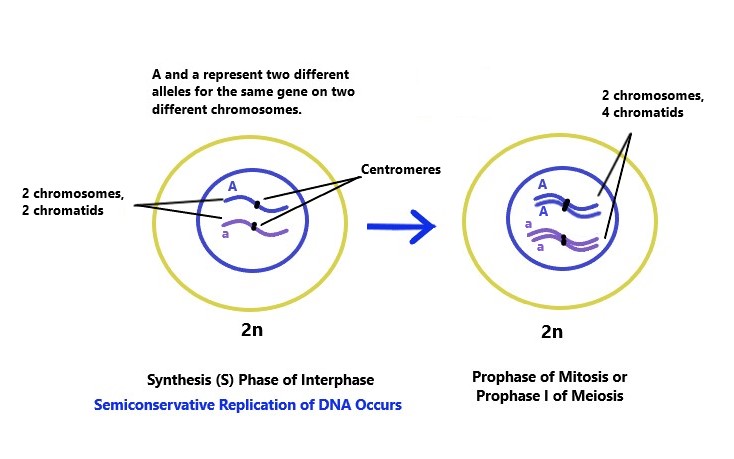 Side note: An organism’s ploidy number is the number of sets of chromosomes it has. For humans, n = 23 in their haploid cells (sex cells) and 2n = 46 in their diploid cells (somatic cells).

Describe what is happening to the chromosomes in each stage of mitosis and meiosis. For the final stage of each cell product, state the ploidy number.

Prophase:The nuclear membrane begins to disappear, and the chromosomes condense by supercoiling, forming distinct chromosomes from the chaotic mass of DNA.

Metaphase: The chromosomes line up along the metaphase plate, which is along the equator of the cell. Spindle fibres attach to the centromeres of each chromosome.

Anaphase: The spindle fibres pull the chromatids of each chromosome apart by their centromeres, and each sister chromatid begins to segregate to opposite ends of the cell, now each an individual chromosome.

Telophase: The nuclear membrane reforms around each new chromosome cluster, and the cell undergoes cytokinesis, in which it divides into two cells. The chromosomes decondense, reforming indistinct chromatin.

Here is a summary of the steps, with a few key words to describe each phase:

Prophase I: The chromosomes condense, and the nuclear membrane disappears. Crossing-over (synapsis) occurs in homologous regions between chromosome pairs. That is, the chromosomes exchange genetic information between sequences that are homologous – sequence of DNA that may be somewhat variant, but produce the same character/trait/function in the organism. This results in new gene combinations for each chromatid. Thus, the daughter cells produced will not be identical to the parent cells, unlike in mitosis. The meiotic spindle also forms.

Metaphase I: the chromosomes line up along the cell equator, and the spindle fibres attach to the centromeres.

Telophase I: The chromosomes are segregated and a new nuclear membrane forms. Cytokinesis occurs as the one cell divides into two. The chromosomes briefly decondense before prophase II.

Metaphase II: The chromosomes line up along the cell equator, and the spindle fibres attach to centromeres, which divide to produce two separate chromatids per chromosome.

Anaphase II: The spindle fibres pull apart the sister chromatids, and move one to each end of the cell.

Telophase II: The chromosomes decondense into chromatin. A new nuclear membrane forms around the nuclei, and once cytokinesis is finished, four haploid gamete products result. 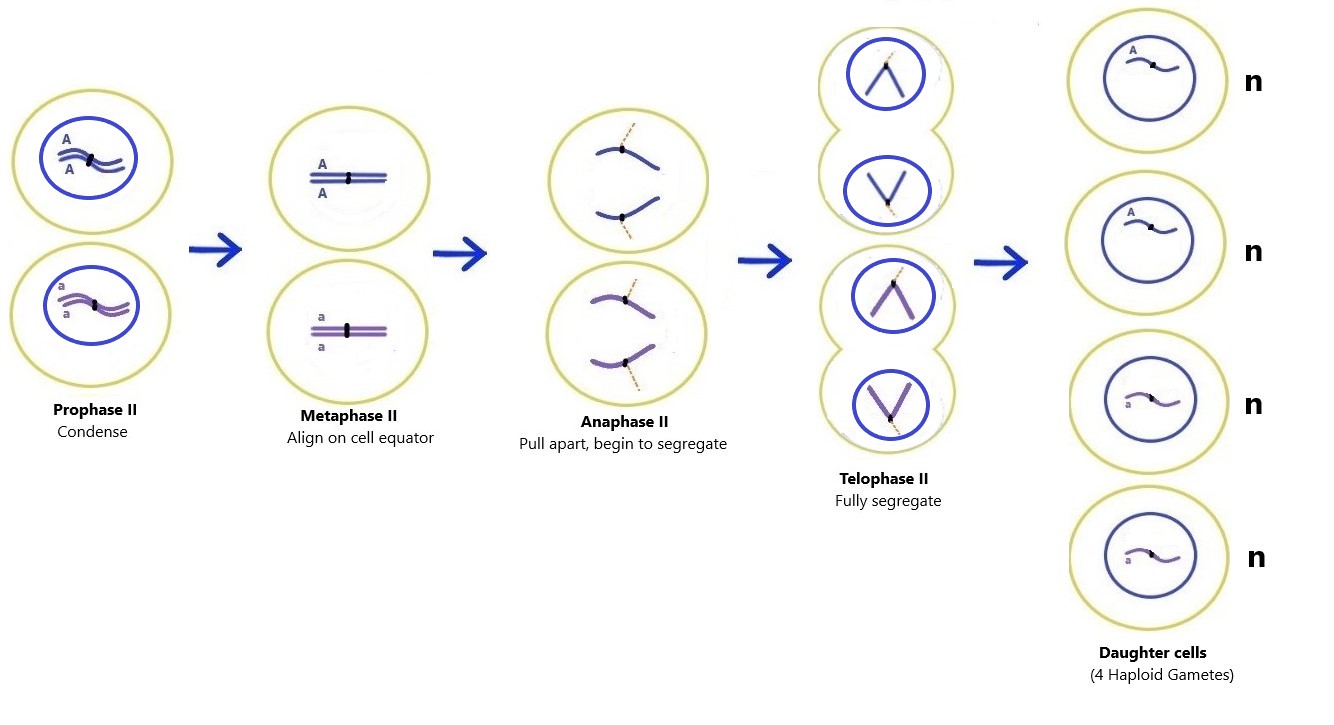 I hope this clears up any confusion regarding the processes of mitosis and meiosis! If not, feel free to email me with any questions!